A New Debate Over Pricing the Risks of Climate Change

Posted at 20:07h in news by Companies Vs. Climate Change 0 Comments

Republished From The NY Times By HIROKO TABUCHI and CLIFFORD KRAUSS

Some companies, including Exxon Mobil, say the economics of climate change are too hard to predict for them to give investors hard numbers about the business impact of global warming.

Federal regulators may disagree and are considering requiring Exxon to do just that for the value of its oil reserves.

Now a long-shot legislative effort by a Florida congressman to prevent such a move by the federal government has become an unexpected flash point in the battle over disclosing climate-related risks — with potentially hundreds of billions of dollars in the balance.

The congressional measure, an amendment to an appropriations bill, originally introduced in July by Representative Bill Posey, a Florida Republican, has been picked up in the Senate version of the legislation. Because the bill is tied up in a partisan debate over spending, there is no certainty the amendment will pass.

But at a time when many Republicans dispute the very notion of climate change, the Posey measure has focused the debate over whether it is reasonable — or even possible — to expect companies to put a price tag on the environmental impact of climate change.

The issue is not limited to Exxon and oil companies. The Posey amendment would allow real estate companies to stay mum on the risks posed to waterfront properties by rising seas, for example, and let food companies leave the impact of future water shortages unaddressed.

“Whether it’s oil, apparel, clothing, utility — almost everything in our economy is built off of some use of natural resources, and the risks they face are substantial,” said Mindy S. Lubber, president of Ceres, a nonprofit organization that works with some of the world’s largest investors on climate change issues.

But some companies, including Exxon, contend that the economics of climate change are unpredictable and that global growth will continue to create demand for resources, making it even more difficult to come up with hard numbers.

Representative Posey is among those who say the federal government has no business forcing businesses to try. He accuses the financial regulator, the Securities and Exchange Commission, of pursuing a political agenda by pressing companies to quantify climate risks.

“These politically motivated and mandated disclosures are not about protecting investors, they are about shaming companies, or at least attempting to shame companies, into adopting their agenda,” he said in July.

“It is a waste of resources for the companies, for their shareholders, and for the S.E.C.,” said Mr. Posey, who has accepted donations from oil and gas companies.

George Cecala, a spokesman for Mr. Posey, did not respond to requests for further comment.

Advocates of fuller corporate disclosure say the sums at stake are vast. Even under a plan that would limit warming to 2 degrees Celsius — a goal agreed to as part of the Paris deal — climate change could wipe out $1.7 trillion of global financial assets, according to a peer-reviewed study published earlier this year in the journal Nature.

“How could anybody tell the S.E.C. to ignore the climate?” Ms. Lubber of Ceres said.

The issue has been for investors, corporate executives and environmental leaders gathered in New York this week for Climate Week, an annual showcase tied to the opening of the United Nations General Assembly.

Discussions here have been galvanized by news that more than 20 world leaders had ratified the Paris climate accord on Wednesday, all but ensuring that the agreement will be adopted by the end of the year. And Exxon’s acknowledgment that the S.E.C. was asking about its climate-risk accounting gave further hope to proponents of fuller disclosure.

Already, a shift in the global energy landscape, brought on partly by a surge in drilling in United States oil and gas shale fields, has brought about a slump in fuel prices, calling into question the viability of future oil projects in far-flung places like the Arctic and deepwater oceans. 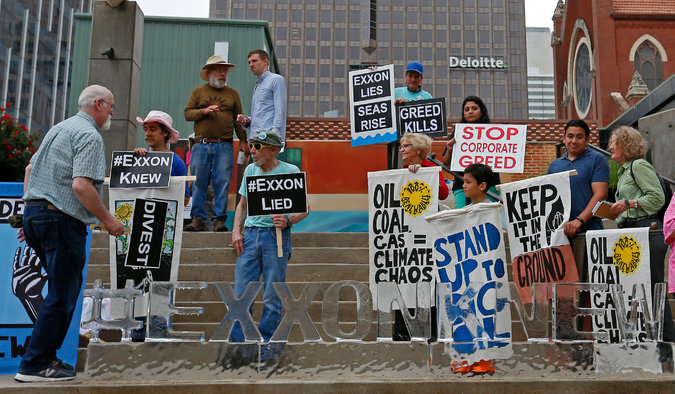 And scientists estimate that as much as three-quarters of the world’s coal, oil and gas reserves must remain in the ground if the world has a shot at keeping carbon emissions under levels set by the Paris climate accord — unless there is a technological breakthrough in capturing carbon and keeping it out of the atmosphere.

Exxon and its American oil industry peers have been reluctant to estimate the risks to their balance sheets. That contrasts with oil companies in Europe, which have been writing down the value of their assets over the last two years as oil prices plummeted.

Energy experts say that is largely because international financial reporting standards require more detailed reporting on asset valuations than the standards in the United States. Last year, Statoil, the Norwegian oil giant, wrote down the value of its North American shale and oil sands assets by $4 billion. Royal Dutch Shell reported a write-down of more than $8 billion.

“The rules are different, the relationships between the companies and governments are different, and Europe has clearer carbon policies,” said Michael Webber, associate director of the Energy Institute at the University of Texas at Austin.

Exxon Mobil, which has accumulated assets over decades, has long argued that its executives take a long view that includes periods of both low and high commodity prices that swing as a matter of normal course.

In its filings to the S.E.C., Exxon Mobil has reported that it has stress-tested its major assets and expects that future cash flow could sustain even its most economically challenged oil and gas fields. The company has conceded that a future write-down of assets is possible if its projections change.

Still, most oil companies, including Exxon Mobil, predict that oil and natural gas prices will recover over the next few years and that demand for those fossil fuels will continue to increase along with growing populations and middle classes in emerging markets.

The companies also say that projections are difficult without knowing what future climate-change regulations will entail, or how new technologies might help curtail greenhouse gas emissions.

“This is like being blindfolded, shooting in the dark at a moving target,” said Fadel Gheit, a senior energy analyst at Oppenheimer & Company.

The one certainty is that the United States oil industry is already under severe financial pressure.

Last year, American petroleum producers wrote down $177 billion in assets, according to a recent report by IHS Energy. Exxon Mobil is in far better financial condition than most other companies in the industry. But this year the company, stretched by debt, lost its top-rung AAA credit rating.

And while the fossil fuel companies may face the biggest climate change risks, the need for financial disclosure stretches to other industries, said Mark Campanale, founder and executive director at Carbon Tracker, a financial think tank that focuses on energy and climate change.

“Banks are lending to fossil fuel projects, and ports and railroads are being built to handle coal, and that’s not viable,” Mr. Campanale said. “We’re talking about a highly disruptive transition, and companies aren’t properly disclosing what that transition will look like.”

Efforts are now afoot to set industry-specific standards for disclosing climate change risks, most notably by the Sustainability Accounting Standards Board, a nonprofit group whose chairman is Michael R. Bloomberg, the former New York mayor.

The board estimates that there are significant climate risks for most companies it tracks, which represent $27.5 trillion, or 93 percent, of United States stocks as measured by market value.

Some companies have led the way with disclosure. The global agriculture giant Adecoagro, in an April 2015 S.E.C. filing, reported that drought had reduced yields for its corn and soybean harvest by as much as 31 percent, and warned that “the occurrence of severe adverse weather conditions, especially droughts, hail, floods or frost or diseases are unpredictable and may have a potentially devastating impact” on future agricultural production.

“Climate risk is the most ubiquitous risk out there,” Ms. Rogers said. “There’s no excuse anymore. We know what the risks are, industry by industry.”

CvCC is a global consulting firm with dozens of experts in many countries all over the world.  We are based in the US and most of our consultants are located there.

380 Broad Avenue Suite 1A
Englewood, NJ 07631 (right across the Hudson River from Manhattan)